The Violence Reduction Unit has been set up by the London Mayor and MOPAC to reduce serious violence in the capital through a multi-agency approach. There is a commitment to involve communities and those affected in the work of the unit; as the new tackling serious violence agenda starts to take shape it’s imperative, we all work together to ensure communities are at the heart of solutions. As CVSs we can play a unique role in helping to make this happen.

In order for serious violence to be tackled at a local level the roles of grassroots community organisations who are often the ‘eyes and ears’ of communities and that of the established youth sector are absolutely paramount. As a member of the new VRU Reference Group chaired by London Mayor, Sadiq Khan, I have made it clear that it is these very organisations and individuals who are often the first to know about simmering tensions in communities and can crucially provide support to victims and families when violence breaks out.

However, these organisations are often poorly funded and are not always respected for the work they do by public sector bodies. This needs to change so there is a power shift from the centre to the local ecosystem and local people are empowered to be part of the solutions going forward. There has been lots of talk about a public health approach to violence which learns from the successful Glasgow initiatives. However, Glasgow is not London and there is a real need for London itself to determine what will work best.

The Violence Reduction Unit is in its early days but has made a commitment to the ‘local’ and the diagram below attempts to describe how the central VRU will engage with proposed local VRUs which will have their own priorities and crucially have some commissioning budgets to spend on activities which local people determine. 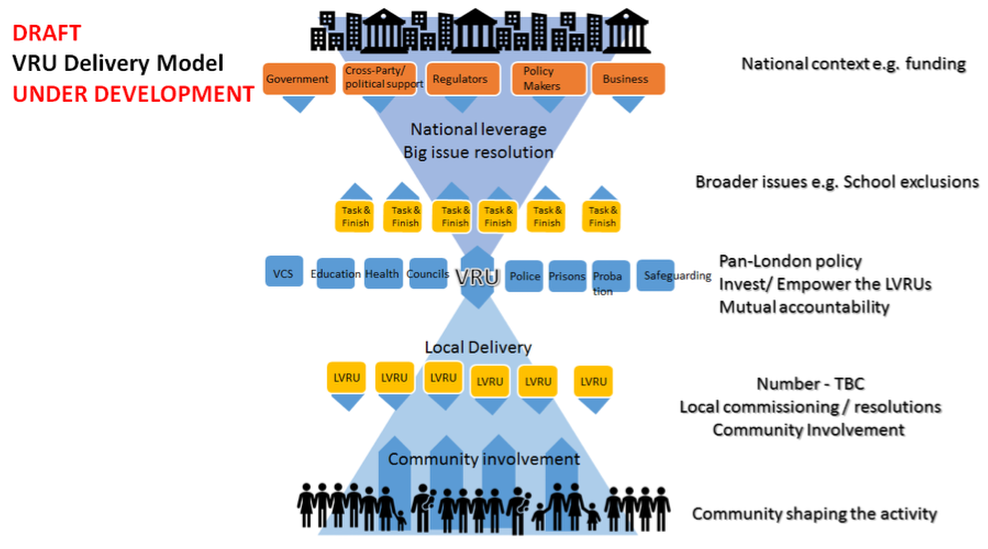 As CVSs we will be working together over the next year to help create a foundation for these local VRUs by gathering information about what is happening in local boroughs and attracting, training and supporting grassroots community champions (young people, parents and community activists) from local areas to work together to provide greater community insight about what will work to reduce violence and empower communities.

I had the pleasure of speaking at the Tackling Youth Violence Network, facilitated by London Youth on the 8th January. There were around 100 youth work practitioners (mainly from the VCS) in the room. Vicky Foxcroft MP spoke about the Youth Violence Commission and I spoke about the emerging priorities and focus of the VRU.

I was taken aback at the number of people who thanked me for my honesty in explaining the challenges and opportunities presented by the VRU’s approach and the need to talk about race, discrimination and institutional/system barriers as well as consistent long-term resources for frontline staff working with young people on the ground.  The following points were raised at the meeting:

If you want to know more about the VRU and the work that CVSs will be doing please contact me: Jake Ferguson, Chief Executive Officer, Hackney CVS jake@hcvs.org.uk or visit our website www.hcvs.org.uk

👋 Help inform insight into the demand for #SocialPrescribing in London by taking part in our short survey! 🚨The survey closes this Friday! #LondonSocialPrescribingNetwork #VoluntarySector twitter.com/londonplus18/s…