London’s vibrant venues make it one of the world’s largest musical hubs. Unfortunately, in recent years this has come under threat following rapid gentrification. Noise complaints from the occupants of new housing developments and the ever-increasing price of property have contributed to the closure of many of the cities venues. It’s unclear which London Borough currently has the highest concentration of music venues per person, or in other words, is the most ‘culturally dense.

This blog uses data taken from a broader cultural infrastructure map published on the London Datastore to answer this question.

In this instance, cultural density is the number of music venues clustered in one borough of London. Some boroughs have a higher concentration of venues in comparison to others. Therefore, it’s important to establish which boroughs are of key interest in this analysis.

So, which boroughs have the most music venues?

The figure below shows music venues in the different London boroughs. The borough of Hackney has the most venues, with 119 present. The City of Westminster and Camden follow closely with 101 and 77 venues respectively. Click on the graph to enlarge. 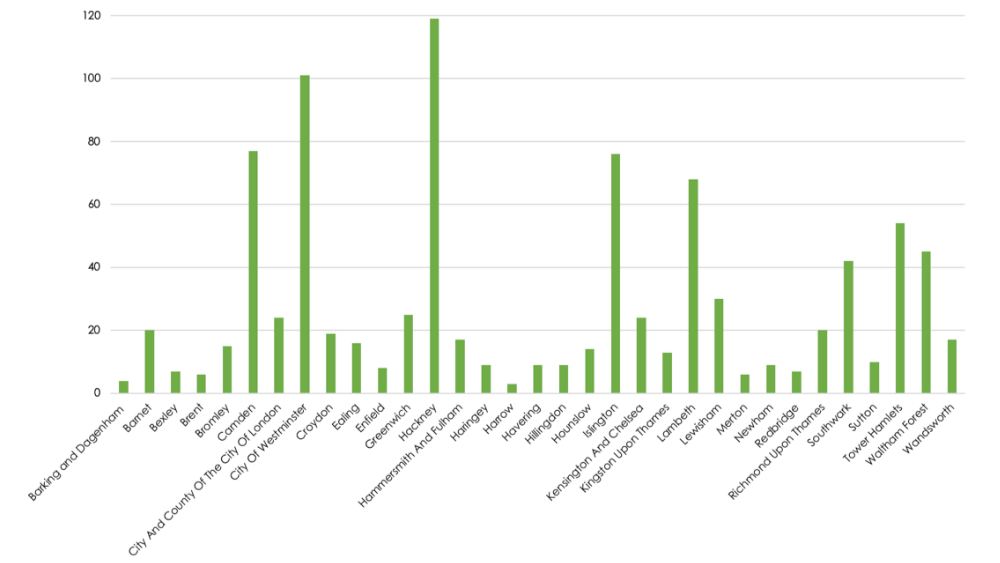 London Boroughs and the number of establishments present

Although Hackney has the overwhelming majority of music venues, it is important to look at other factors in the different London boroughs. We have used a ratio to find a percentage of what borough is the most culturally dense. Comparing the number of venues with the area of the borough in hectares can determine the most culturally dense borough. Click on the graph to enlarge. 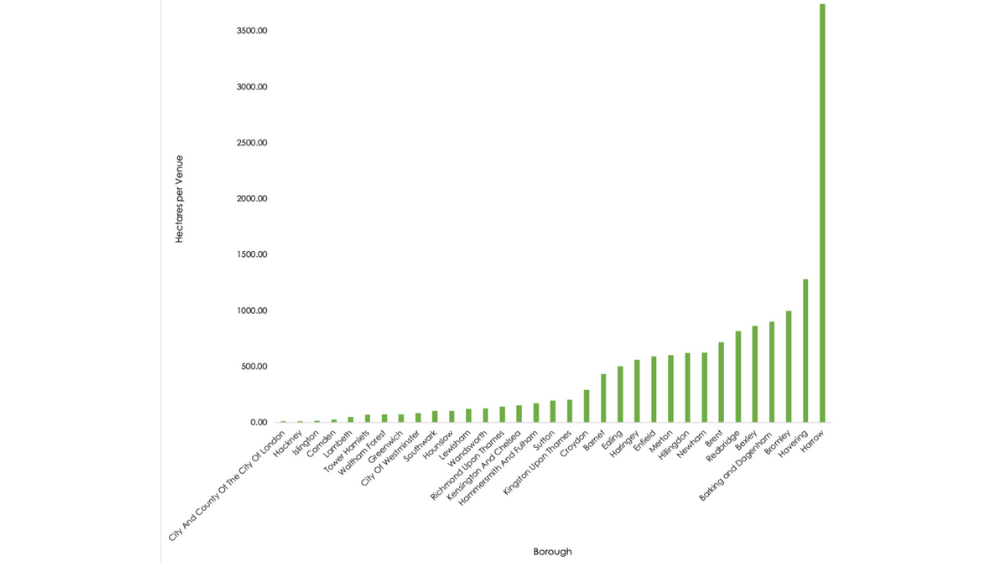 When calculating the ratio the outcome of the most culturally dense borough above changed. The City of London is the borough with the least amount of hectares per music venue at 12.10. This is followed by Hackney and Islington with 13.78 and 15.95 hectares per venue respectively. Hackney remains in the top 3 in both lists. Interestingly, Islington appears to be more culturally dense than the city of Westminster and Camden.

With this finding, it is important to distinguish which result is more legitimate when questioning which borough is most culturally dense. On the one hand, Hackney is by far the most culturally dense borough because of the number of venues present. On the other hand, the small scale of the City of London makes it the densest as there is the least amount of space per venue.

Another key factor to explore is the population sizes of different boroughs and how that relates to “cultural density”. This explores the idea of how many venues are present in a borough compared to the number of people. After analysis, the City of London has the lowest person-to-venue ratio, with 366.67 people to each venue. After this Hackney and Westminster follow, with 2305.04, and 2397.03 people respectively.  The figure below shows this. Click on the map to enlarge. 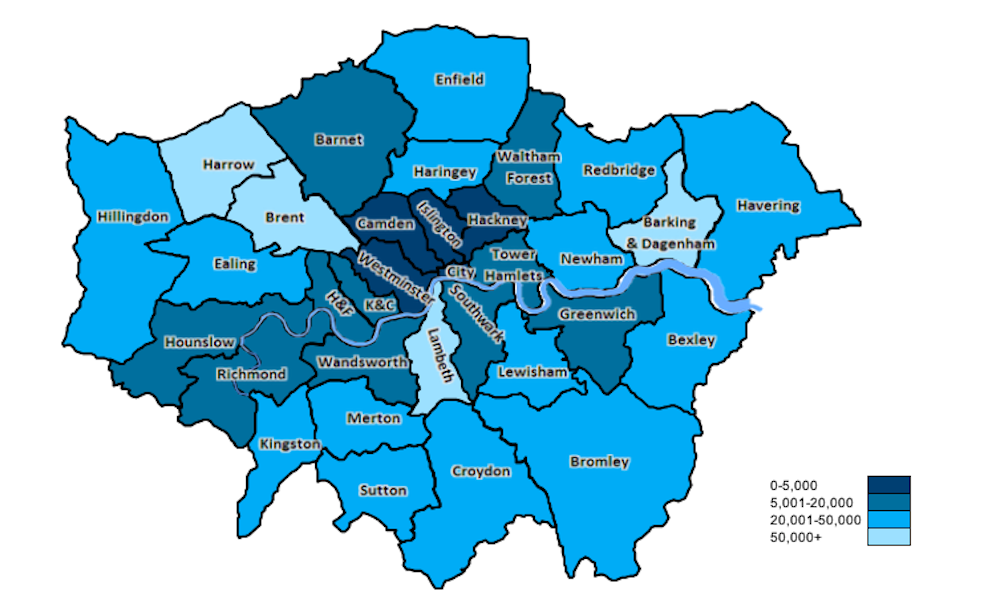 Both the City of London and Hackney come out on top in terms of cultural density. But a way to distinguish between the two boroughs may be to look at their cultural history, and explore whether grassroots music venues are present there or not.

On the Cultural Infrastructure Map, the Music Venues Trust and the GLA do not specifically define what grassroots music venues are. We have interpreted this as the most basic venues that have historically made a cultural impact. When examining the dataset, Hackney has 19 grassroots venues compared to zero in the City of London. Using this data Hackney is more culturally dense than the City of London as it’s venues have more historical culture present.

One key purpose of this blog is to examine further questions regarding music venues and their chances of survival in a rapidly gentrifying London. The question of which boroughs are the most culturally dense is vital. This is because it is a perfect segway into further questions that must be asked about the topic. Are boroughs changing in terms of their cultural density? Are venues being pushed out solely due to financial and political reasons?

On the contrary, are there boroughs that have new policies in place that will allow for venues to be treated as valuable additions to the cultural infrastructure that is already in place? London is fast-paced and ever-changing, undoubtedly shaped by culture. We must consider these questions for the culture to stay in place and not disappear.

With any form of research and analysis, multiple caveats will be present in the data used. The dataset used in this present study refers to music venues in the varying boroughs of London. The cultural infrastructure map of London is dense, as the dataset defines a music venue to be a diversified collective of establishments ranging from pubs to larger music venues.

Therefore, we must account for missing values in the dataset. We recommend that a review is undertaken of all the venues across the boroughs. This will ensure that any conclusion made from the analysis is as accurate as possible. The GLA commission research explains that they only include venues which have hosted a minimum of six music events per year. Perhaps, this could explain why some venues around the city have been left out.

If you are interested in researching data about London, take a look at our London Datastore resource guide.